My Kid Is Not Crazy is the Cinematic, pediatric equivalent of BRAIN ON FIRE-MEETS-Infectious Madness. A film that will change the way we look at mental illness forever.

My Kid is Not Crazy documentary trailer from Tim Sorel on Vimeo.

More than 30 years ago, Susan Swedo—a doctor with the National Institutes of Health—discovered that an undiagnosed strep infection was the cause of one child’s disabling illness. The more Swedo dug, the more evidence she found: Strep was linked to symptoms normally chalked up to psychiatric illness.

Swedo has put her reputation and career in jeopardy as she fights to cure the condition she named: Pediatric Autoimmune Neuropsychiatric Disorder Associated with Streptococcal Infections (PANDAS). Influential neurologists and others publically ridicule Swedo and her PANDAS theory, creating controversy over diagnoses and treatment. This group has become known on social media as the “non-believers.”

The result: the entire pediatric-care industry is confused and doesn’t know what to do.

“My Kid is Not Crazy,” a film by Tim Sorel, tracks the journey of six children and their families as they become tangled in the nightmare of a medical system heavily influenced by the pharmaceutical industry. Here it’s common for a caregiver to prescribe a young child with a Selective Serotonin Uptake Inhibitor (SSRI) but hesitate to prescribe an antibiotic to counteract a potential infectious-based trigger. For some of these kids, what happens after several years is shocking and sad. 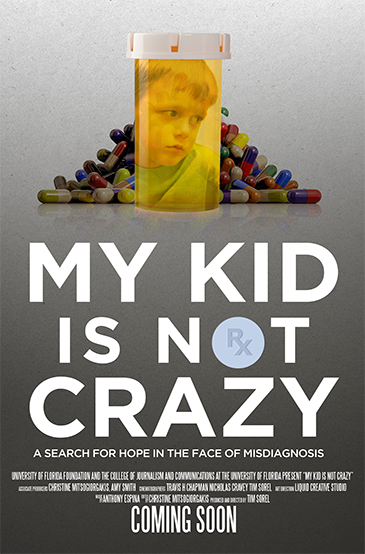 My Kid Is Not Crazy has finished post-production and is being judged by several US film festivals. For past news on the film please see the NEWS page.